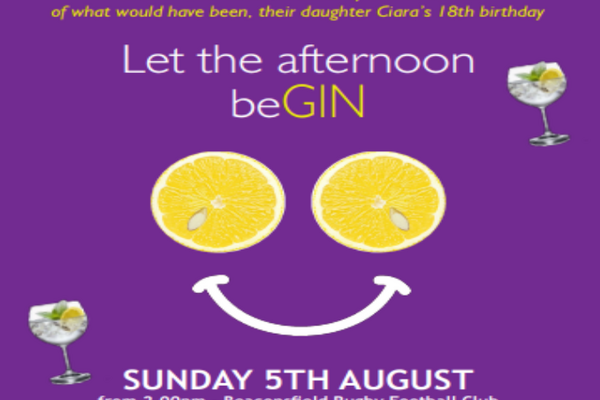 "5th of August 2000 was a momentous day in the O'Mahony household, with the arrival of our first child, Ciara. At a very uncomfortable and turgid 38 weeks pregnant, a non-routine scan was performed and it was discovered that Ciara had some fluid on her chest, she was induced the next day. After a challenging and tiresome 18 hours of labour, baby Ciara arrived safely weighing in at a bonny 8 lbs.

Unfortunately, as Ciara had this fluid on her chest, she was whisked away almost immediately in order to have it drained and consequently spent the first 15 hours of her life on a ventilator. Very quickly, it was discovered that Ciara had a tear in her lymphatic system, resulting in renewed build up of fluid in Ciara's chest.We realised then that we were in for the long haul and despite feeling cheated that we had been unable to take Ciara straight home, we set our minds quite confidently that this was to be a short bump in what was to be her long and happy life with us.

It was 20 days into Ciara's life that we noticed some leaky fluid under the tape that was holding the cannula on her tiny hand in place. We alerted the nurse and asked for it to be changed, it was and we thought no more about it. Ciara and I had our cuddles and read our Mr Men books as normal. I was excited at the thought of her moving to the opposite side of the nursery, which meant closer to home, She was doing so well. We never, for one nano second ever imagined not bringing Ciara home but when we left the hospital that evening, the evening of the 24th August 2000, we weren't to know that that was the last time we would ever recognise Ciara as our bonny baby.

Routinely, the next morning, we picked up the phone to the hospital and a somber voice informed us that Ciara had had a "nasty turn" in the night and that she wasn't doing very well. They tried to brace us for the drastic change in Ciara's appearance before we arrived at the hospital. Nothing could have prepared us. Ciara had been ravaged overnight and was on a ventilator.

It transpired that the bacteria, which had originated from the leaked line had travelled into Ciara's spinal fluid and the infection was Meningitis and Septicemia. I recall the moment that word was used just thinking; babies die from this; my baby could die. On August 27th, we took the decision to have Ciara baptised in the hospital.

Ciara fought hard for such a wee one and we loved how her "sats" always improved whenever we were nearby. It gave us hope that she knew who we were and how much she was loved.

On the morning of Tuesday the 5th of September 2000, Ciara underwent a CAT scan, after which we were told that the damage to Ciara's brain was extensive and were advised that the most humane thing to do was to 'let her go'. Heart broken, we made a decision to contact all our immediate family to rally around and say their own final farewells. It was surreal. Thereafter, Ciara was taken off her life support machine and we carried her to a private room to say our own goodbyes. She drew her last breaths whilst we cradled her and died in our arms at 10.15 that night. The hospital staff, nurses, doctors and consultants were all incredible - it truly is a vocational profession.

We have done fundraising in various shapes and forms for SSNAP before now but not for quite a while. We decided that 18 is quite a milestone and that we would like to commemorate it." 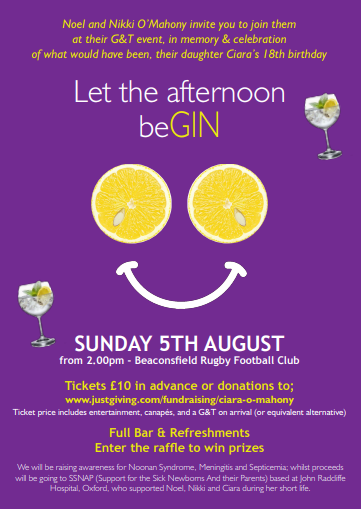