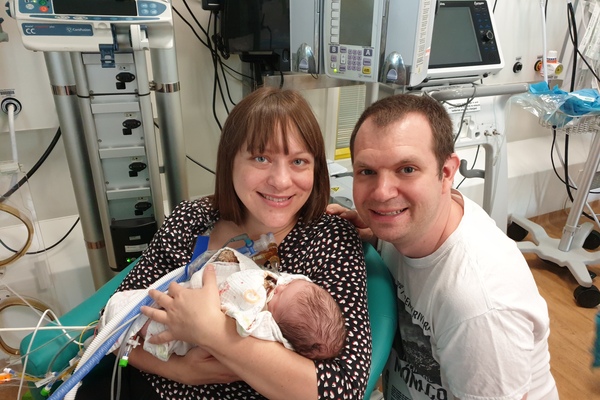 Inspirational Paul Masters has completed his epic challenge, in tribute of his gorgeous twin boys, James and Ryan, raising an incredible £23,759.48!
21 Nov 2021 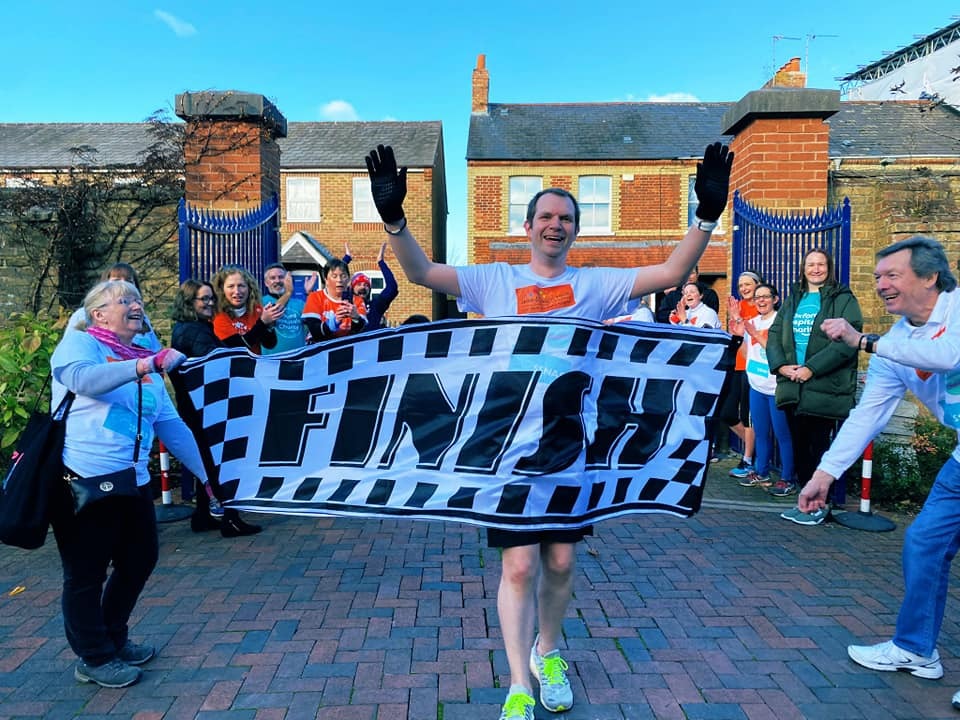 He's done it! Surrounded by family and friends, and running alongside him for his final mile were representatives from local charities, SSNAP, Helen Douglas Hospice and Oxford University Hospitals, Paul Masters has completed his final 365th mile, raising money in tribute to his gorgeous twin boys James and Ryan. Such an incredible and emotional day for all, and SSNAP felt extremely proud to join him for his last few steps, starting at the John Radcliffe Hospital and ending at Helen Douglas House.

"It is such an honour and privilege to lead the SSNAP Team some days. Today we ran the final mile of Paul’s 365 miles, raising over £23,000 for 3 Oxford charities; in memory of twin brothers James and Ryan. Not a dry eye at the finish - Paul you are a true SSNAP Superhero and an inspiration to so many. Thank you."

To see or hear more, check out Paul and Siobhan's interviews on South Today and BBC Radio Oxford; 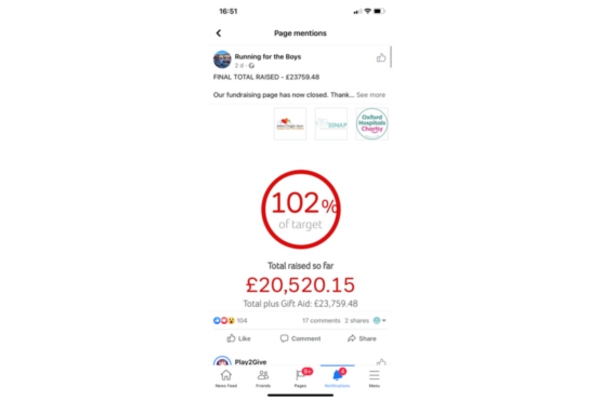 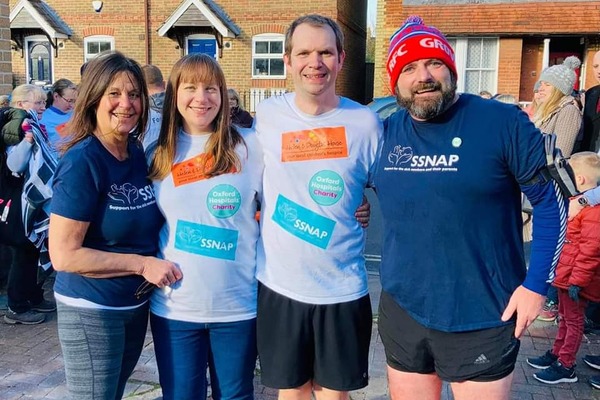 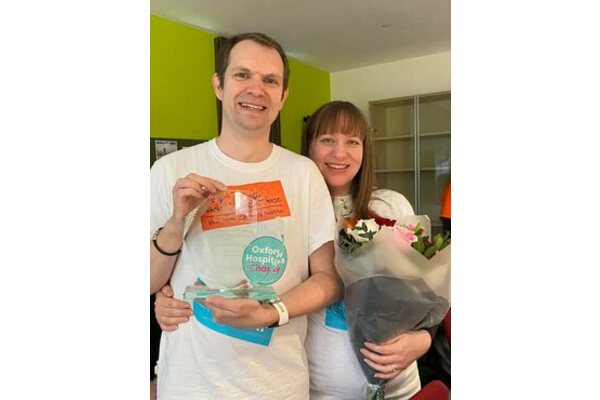 **Newsflash!** Paul has just 12 miles left before he has run a staggering 365 miles in memory of his precious twin boys, James and Ryan.

We asked him how he was feeling for his final 12 days:

"I can't believe I'm finally within touching distance of the end of my challenge. It's been an amazing journey right from day one when I realised that I couldn't actually run a mile. Through to now when I'm this close to finishing all 365. There were many days where it was hard to stay motivated and keep going especially when it was freezing cold outside but then thinking about little Ryan's time in the NICU and all the other babies in there now who are fighting every single day it brings it home that actually just to go and run for them is the least I can do. The money raised will and is already doing so much to support them and their parents and I'm so pleased that we were able to do this for them in our boys memory. With just under 2 weeks to go I'm just trying to keep my legs going just that bit longer and stay injury free and am very much looking forward to achieving something which at times early on I wasn't sure I was able to do. Thank you so much for your support." Paul x

Paul and Siobhan are a true inspiration to us all. We can't wait to join him on his final mile from the JR Hospital to Helen and Douglas House on Sunday 21st November.

SSNAP would like to say a huge thank you and "keep going" shout out to incredible Paul Masters, who has set himself the epic challenge of running 365 miles in 365 days, even though, previous to starting this fundraising challenge, he had never run before!

Paul and his wife Siobhan, set up 'Running for the Boys' as a tribute to their precious twin boys James and Ryan. Siobhan and Paul sadly said goodbye to James and Ryan just over a year ago. To date they have raised a staggering £15,300 for the three charities that supported them most; SSNAP, Helen House Hospice and Oxford Hospitals.

Paul has now run an epic 253 miles and is hoping to undertake his final mile from the John Radcliffe Hospital to Helen House Hospice in November . Please dig deep to help this inspirational family in smashing their incredible £18,000 target in tribute to their sons James and Ryan. Thank you. Team SSNAP xxxx

Donate to 'Running for the Boys' 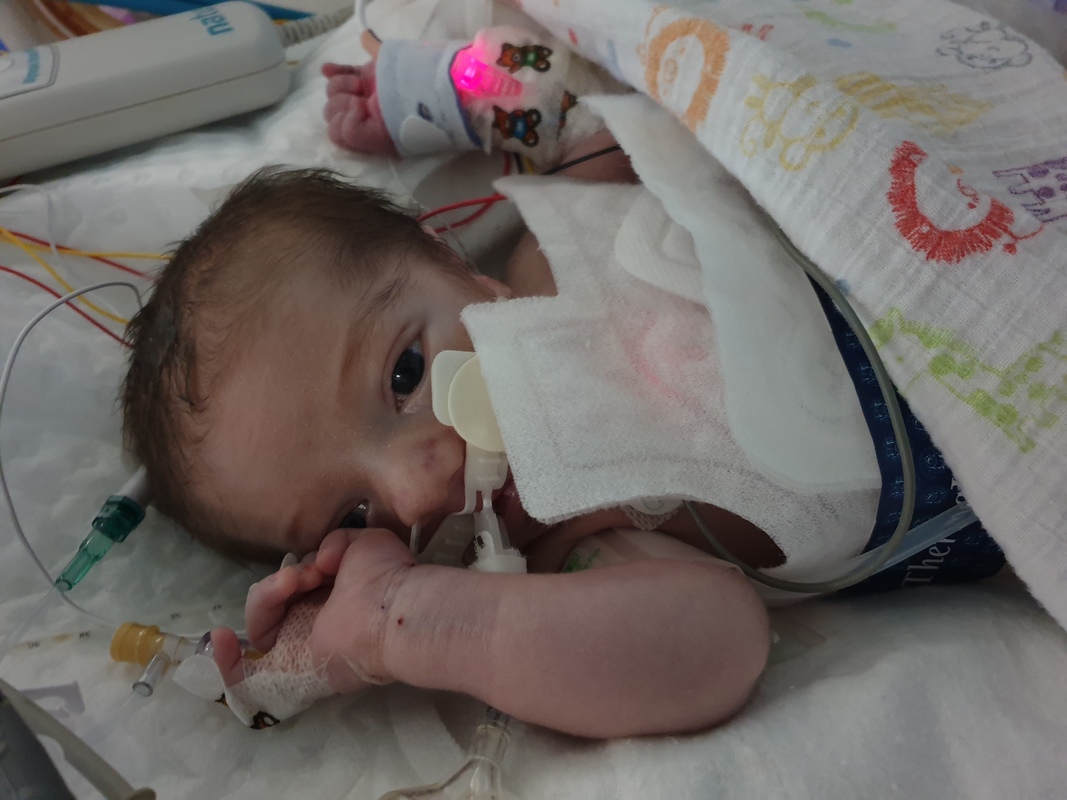 "The 5th August 2020 was meant to be the happiest day of our lives. Our twin boys James and Ryan were finally making their way into the world.

Little did we know that events had already taken an awful turn. When trying to locate our boys heartbeats before the planned c-section they were unable to find a heartbeat for our biggest twin (James) the heartbeat for our smaller twin (Ryan) was low and the twins and Siobhan were rushed into emergency surgery at Stoke Mandeville Hospital.

Over the next 30 minutes we would learn James was sadly born sleeping and Ryan although still with us was in a very serious condition.

He was moved to the John Radcliffe in Oxford. Over the next 5 and a half days having been cooled to try and prevent brain seizures and managing multiple organ failure we finally had to make the heartbreaking decision to let him go and join his brother.

However in his usual fighting way when the machines that were keeping him alive were removed he kept breathing on his own and although nothing could be done for him he kept holding on for that bit longer. He was entering what became know as 'Ryan Time'.

We got transferred to Helen House hospice to spend what we knew were the final hours/days with Ryan. He finally left us after a further 3 and a half days, on 14th August.

The reason I am doing this fundraiser is because quite honestly without the support of these 3 charities I honestly don't think we could have got through what was the most awful and challenging time.

When we arrived at the John Radcliffe we were allowed to bring James across with us. Thanks to the Ashfield Bereavement Suite he was able to stay with us in our room in a 'cool cot' so we could take all the time we needed to say goodbye whilst still being able to be close to Ryan in the NICU downstairs. This suite is charity funded through the Oxford Hospitals Charity and for anyone going through child bereavement it is so vital to get those extra few moments with your child to grieve.

The charity SSNAP (support for the sick newborn and their parents) really helped us through too. Whilst we were sitting by Ryan's bedside for all the waking hours we could manage it was hard to remember to look after ourselves. They provided us with food and snacks to keep us going. They also provided us with a pram to go out for a walk in the grounds with Ryan in the time we got between taking off the machines and going to Helen House which gave us some lovely memories and Ryan the chance to feel the sun and wind on his face.

Finally Helen House were superb. Giving us the chance to spend 3 days with Ryan going for walks around the grounds. Reading him story books and films to watch together, all the things we had dreamed of doing but never thought we would get the chance. They provide anything we needed to make all the memories we could whilst offering us constant support and reassurance that when the time came they would be there for us. They also fed us and even checked in on him every hour through the night so we could get some well needed sleep.

Without charity funding these things could not keep running and I couldn't begin to imagine how hard it would be to go through any child loss without these things in place. So please do what you can so other parents get the same support we had.

That's why I am going to be running to keep them running. 365 miles over 365 days. I will aim to run a mile a day but any days I miss means I will just have to go that little bit further to catch up.

Thank you so much for your support, it really means so much to us and to others going through what has to be the worst thing in the world, losing a child." 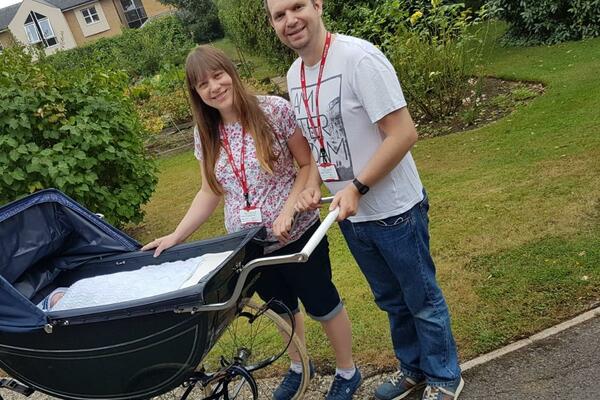 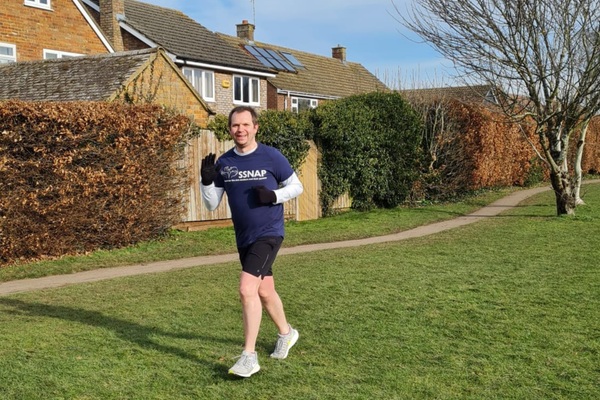 Running yet another mile in his SSNAP t-shirt 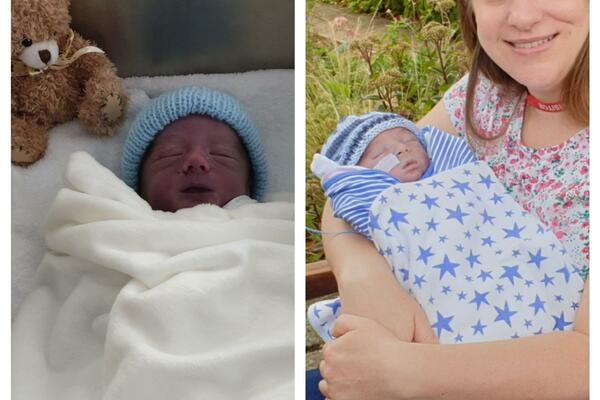