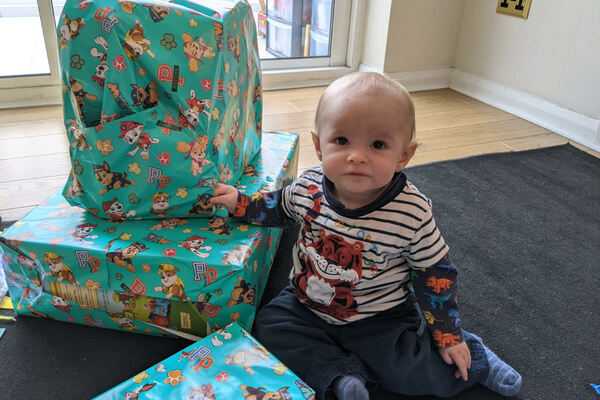 Baby Asa turns one and raises an amazing £860 for SSNAP through birthday donations in celebration.
5 Jul 2021

SSNAP are so grateful to the Usherwood Family, for kindly asking for donations for the charity in celebration of their son Asa's first birthday who was supported by SSNAP when on the unit over a year ago. A HUGE Happy Birthday Asa and thank you from all of us at Team SSNAP! xx

"Asa was diagnosed antenatally with a condition called Oesophageal Atresia with Tracheo-Oesophageal Fistula (OA/TOF). The nature of this condition meant that he would need a big operation shortly after birth to connect his oesophagus to his stomach and disconnect it from his windpipe.

For this reason he was induced at 37 weeks at the John Radcliffe hospital and was taken straight to the intensive care unit. He was operated on the next morning and was kept completely paralysed and fully ventilated for 10 days following the operation in order to prevent him moving and tearing his oesophagus. Despite his operation being a success, Asa was unable to feed orally until he was 5 1/2 weeks old so was tube fed up until that point.

Thanks to funds raised by SSNAP I was loaned a hospital grade breast pump so I was able to express milk to be fed to him via his tube. My husband and I were also provided with on hospital site accommodation which was invaluable to us because we live nearly an hour away from the hospital.

I remember the SSNAP team coming around the intensive care unit, checking we were ok, bringing us teas and coffees, chocolate bars and fruit and just being a friendly ear to talk to.

We finally left the neonatal unit the day before Asa turned 6 weeks old, during the first lockdown stage of the pandemic. The next months were difficult and challenging with many more bumps in the road, hospital admissions, procedures and infections.

Despite all of his difficulties, Asa is such a happy baby who is doing so well and as his first birthday approached we wanted to help celebrate it by giving back to the team that supported both us and the neonatal unit where Asa received such great care and without whom Asa would not be the healthy and happy boy that he is today. We, our friends and our family would like to say a massive thank you to team SSNAP and the staff at the neonatal unit at John Radcliffe Hospital." Carly, Asa's Mum.

Asa with his mummy, daddy and big brother Ezra at Legoland! xx